Nature must be centre of climate adaptation efforts | WWF

Nature must be centre of climate adaptation efforts 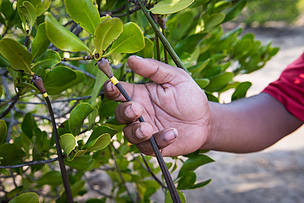 GLAND, Switzerland (10 September 2019) - Nature offers solutions to mitigate against the impacts of rising sea levels, floods, droughts, and heat waves. So, a new report that says nature must be our first line of defence to adapt to the climate crisis is very welcome, says WWF.

The report was released today by the Global Commission on Adaption (GCA). The GCA is led by former UN Secretary General Ban Ki-moon.

Manuel Pulgar-Vidal, leader of WWF’s global climate and energy practice, said the world is not on track to adapt to the climate crisis, and the most vulnerable communities are bearing the brunt of the consequences. “Through immediate adaptation action, the world can continue to make progress on social, economic and environmental goals while avoiding the costs of anticipated losses. But without bolstering the natural systems on which the world depends, we face an unfathomable future,” he said.

Deploying nature-based solutions to help the world adapt to the climate crisis must become a clarion call for world leaders at the Climate Action Summit in New York on 23 September, Pulgar-Vidal said.

Vanessa Pérez-Cirera, deputy leader of WWF’s global climate and energy practice said moving forward, it will be crucial for the GCA to establish a robust nature-related action track in its work. “The report already discusses an action track for natural solutions and a global resilient basin initiative. These merit the highest political support from the Commission, as well as the backing of an increasing number of country champions,” she said.

As we make choices about how to adapt food, water, infrastructure and cities to the changing climate, it is imperative that we avoid further degrading the natural environment. “If we rely on nature to provide adaptation and mitigation benefits for people, it is critical that we help nature itself adapt to the changing climate. For this reason, we invite the GCA to also adopt a principle of addressing climate risks on nature,” Pérez-Cirera said.

“The GCA must prioritize green infrastructure wherever possible. While it’s often not only economically competitive compared to traditional infrastructure options, it helps in storing carbon and improving ecosystems health and their ability to provide further ecosystem services to our societies,” she said.

1. For WWF, nature-based solutions for climate change are those that intentionally utilize nature to deliver tangible and traceable climate adaptation and/or mitigation benefits that also have direct positive implications for human development.

2. WWF ́s 5 principles for good nature-based solutions are: (i) must contribute to climate ambition, (ii) are synergistic, (iii) are co-designed with local stakeholders, (iv) are scalable or replicable and (v) traceable.